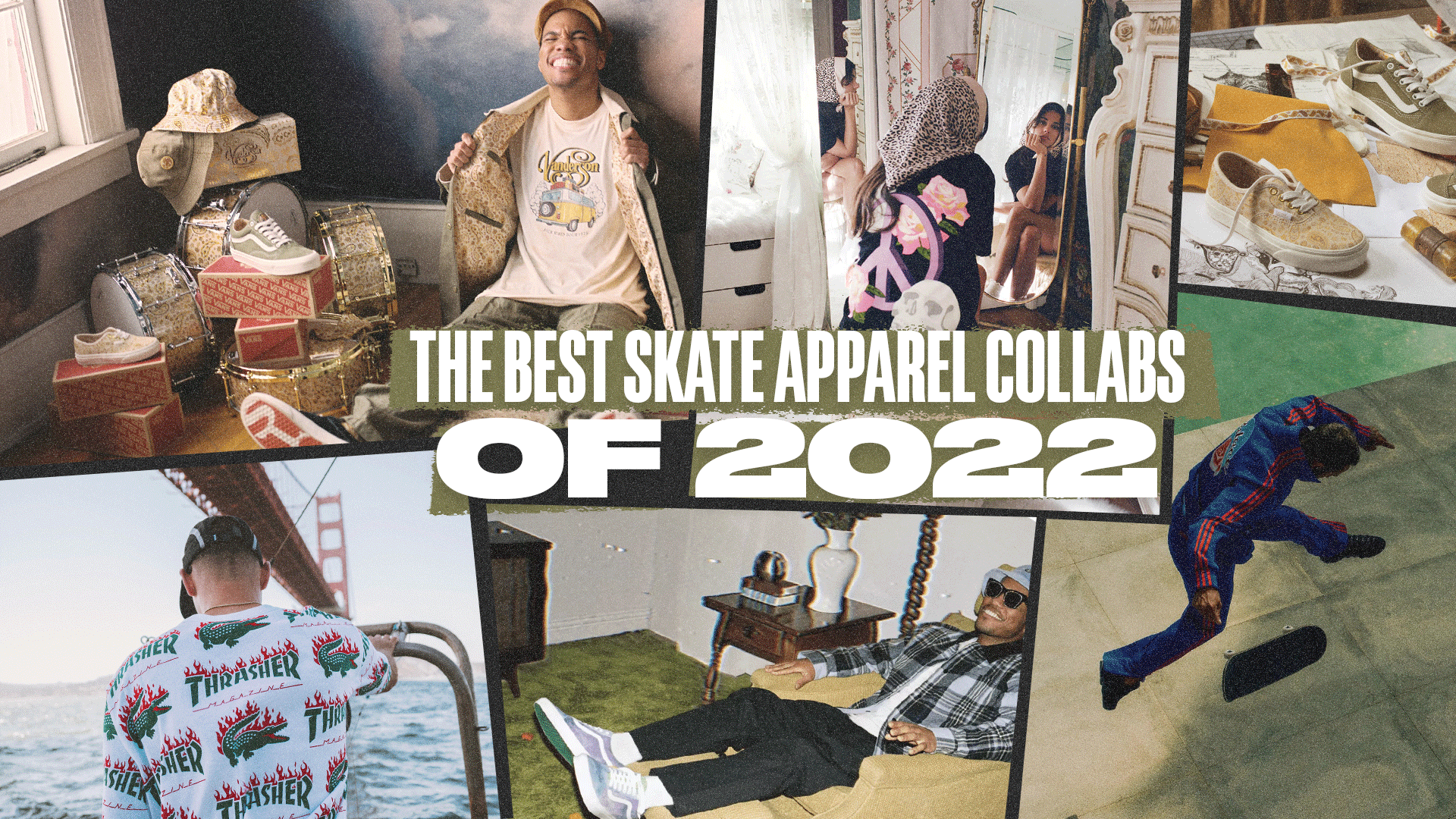 Skateboarding is more than a pastime; it's a genre of identity, an aesthetic, and a lifestyle for those who partake. What started as a simple way to kill time for surfers unsated, has quickly become one of the world's most recognizable (and respectable) action sports. But, with the rise in skateboarding's popularity came the inevitable formulation of its very own 'street-centric' apparel.

Baggy jeans, oversized clothing, and gigantic footwear silhouettes were certainly dominant in the early to late 90s; what many consider to be skateboarding's heyday. Whether or not it was a product of pop culture at the time -- riding on the coattails of the generation's various punk/street movements -- the medium provided individuals with the perfect catalyst, and canvas, to express themselves in a more dynamic way.

There are more than a handful of resources, historians, and experts who can fill you in on the intricacies of fashion, art, and contemporary culture -- all of which had their own hand in forming various components of skate's history. But we're not here to give you a rundown of the industry's transition throughout the ages. Instead, we're going to scratch the surface of the styles, partnerships, and designs from the sport's biggest brands; diving deeper into the collaborations that caught our eye in 2022. 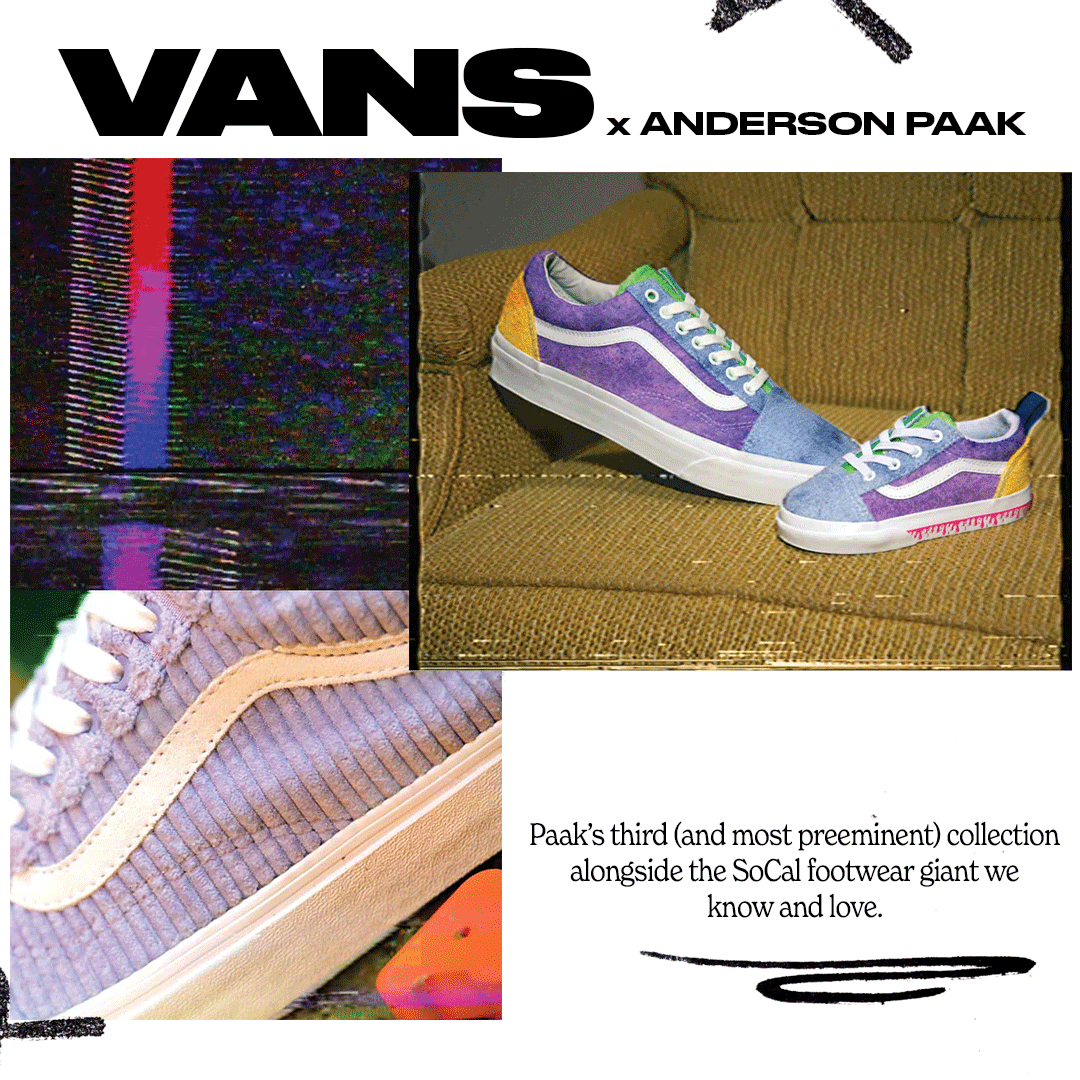 There isn't a list within the skateboarding sphere that's immune to Vans' influence. This monolithic brand has almost single-handedly cultivated a market for skate- and surf-centric footwear, branching out into new areas of the genre, creating unique collection's alongside the industry's biggest designers and focusing on altruistic artistic commitment.

That's why the outfit's third release alongside Grammy-award-winning artist and Vans global music ambassador, Anderson Paak, became one of this year's most sought-after apparel collaborations. 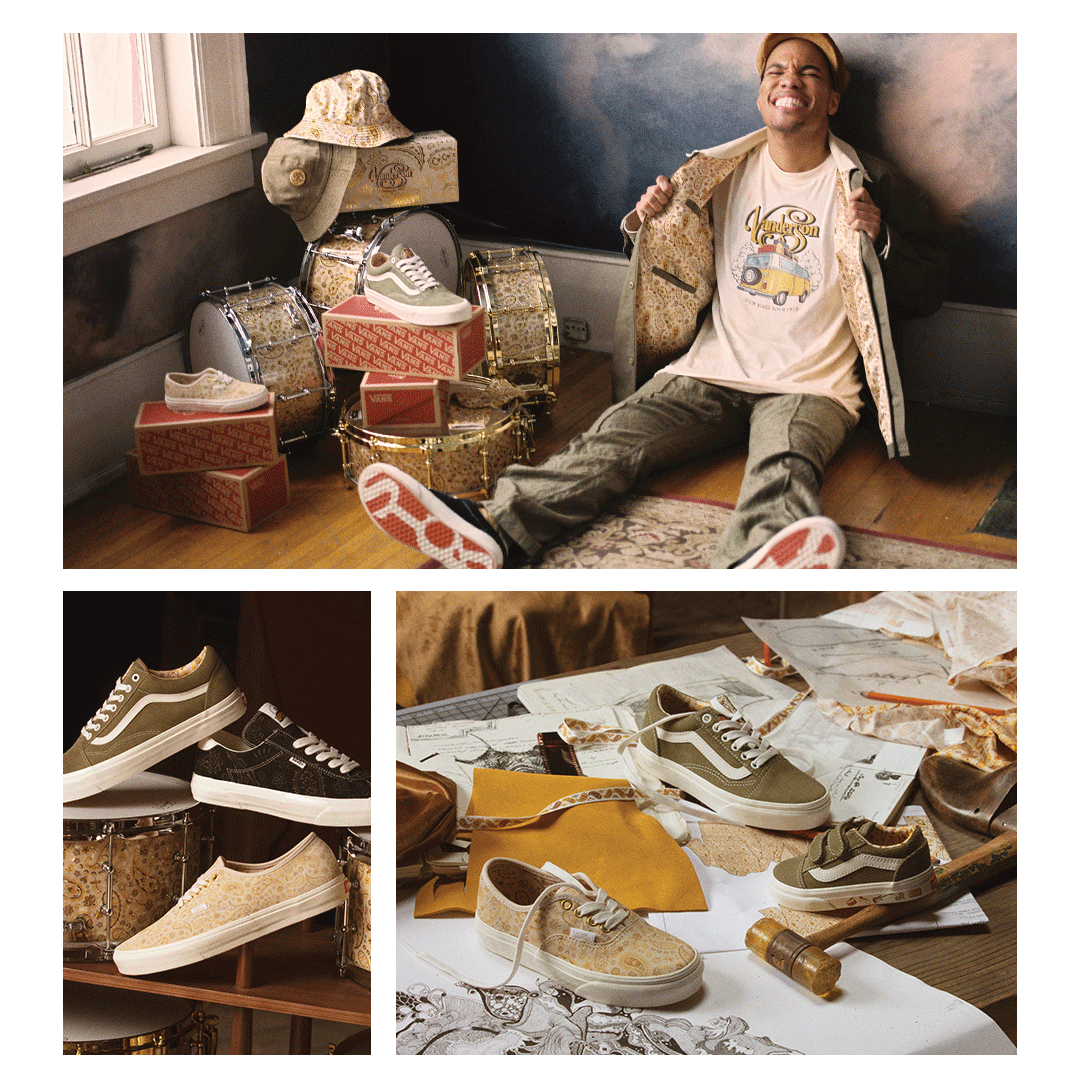 Filled to the brim with muted colors, minimalist design, and amazing typography that bridges the gap between past and present, the latest release from Vans x Anderson Paak is a no-frills addition to our list of favorite collaborations from 2022.

The sad part? You'll have a difficult time finding items from this collection outside of third-party sellers. It sold out shortly after its release in June of this year. 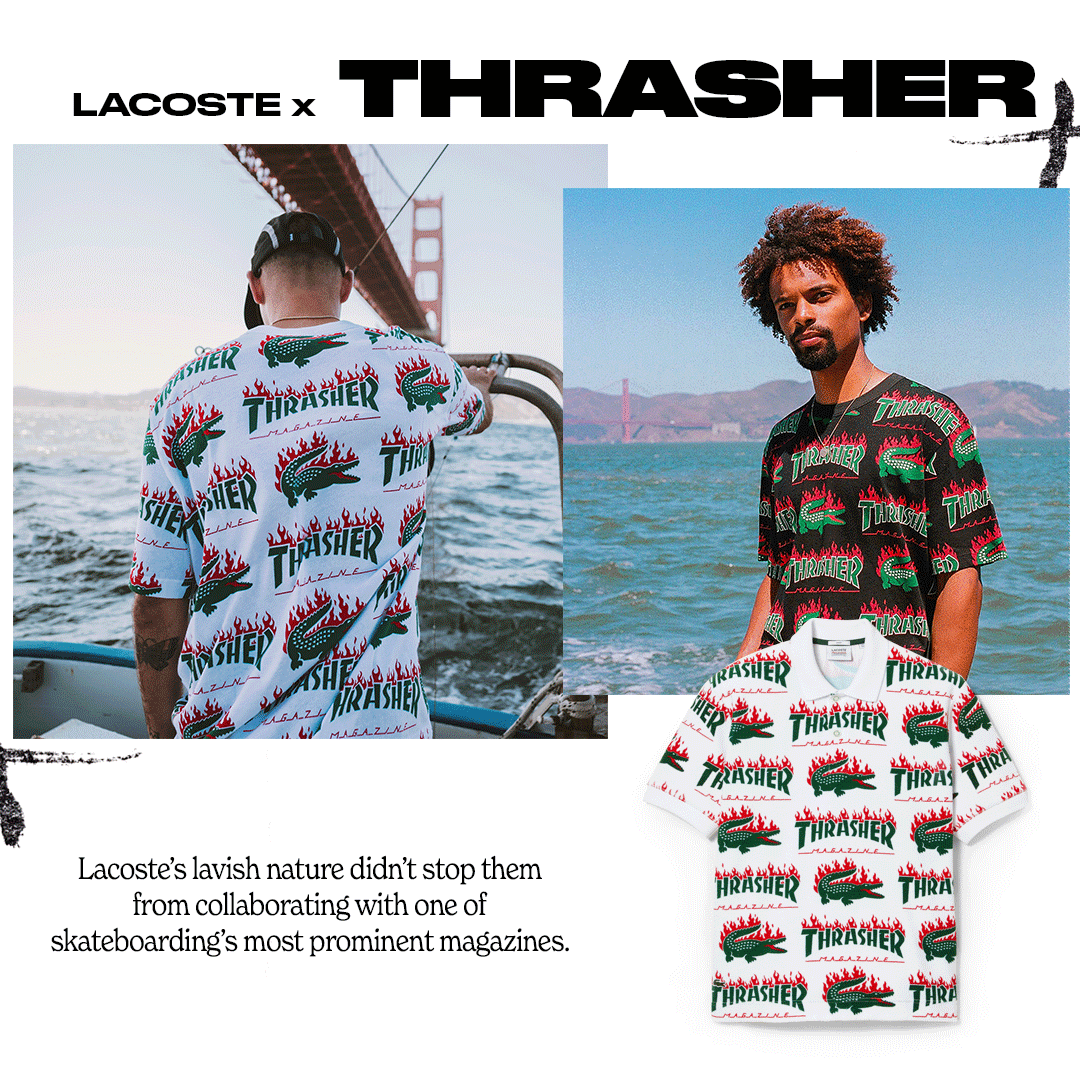 Next, we've got the odd (but extravagant) partnership between Lacoste and Thrasher.

Don't worry, we were equally astonished when we heard that one of fashion's most prolific brands decided to sign the dotted line with skateboarding's premiere editorial magazine. However, we're here to say that the two didn't disappoint -- the capsule is a testament to timeless design, unifying the (oftentimes) grungy world of skate with the more refined, collared culture that Lacoste dwells within. 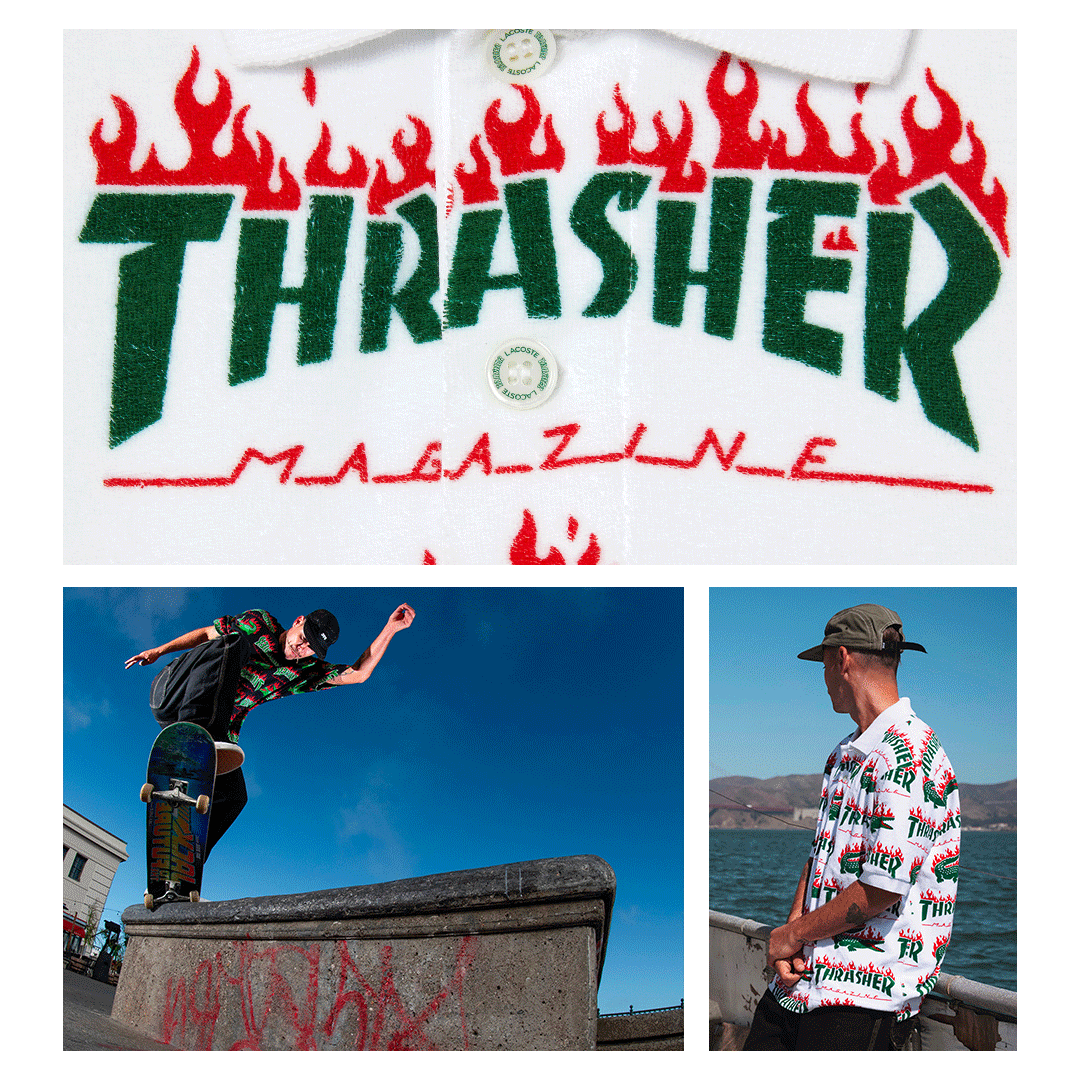 The collection features an array of unique Terry cloth garments, as well as a hoodie, t-shirt, tracksuit, and socks adorned with the brands' iconic namesakes. To honor San Francisco, the birthplace of Thrasher, it also adopts minute detailing -- including, but not limited to, imagery of the Golden Gate Bridge -- paying homage to the city's most notable areas.

The best part? Lacoste's epochal Crocodile takes center stage on a vast majority of the collection's pieces, emblazoned in flames. 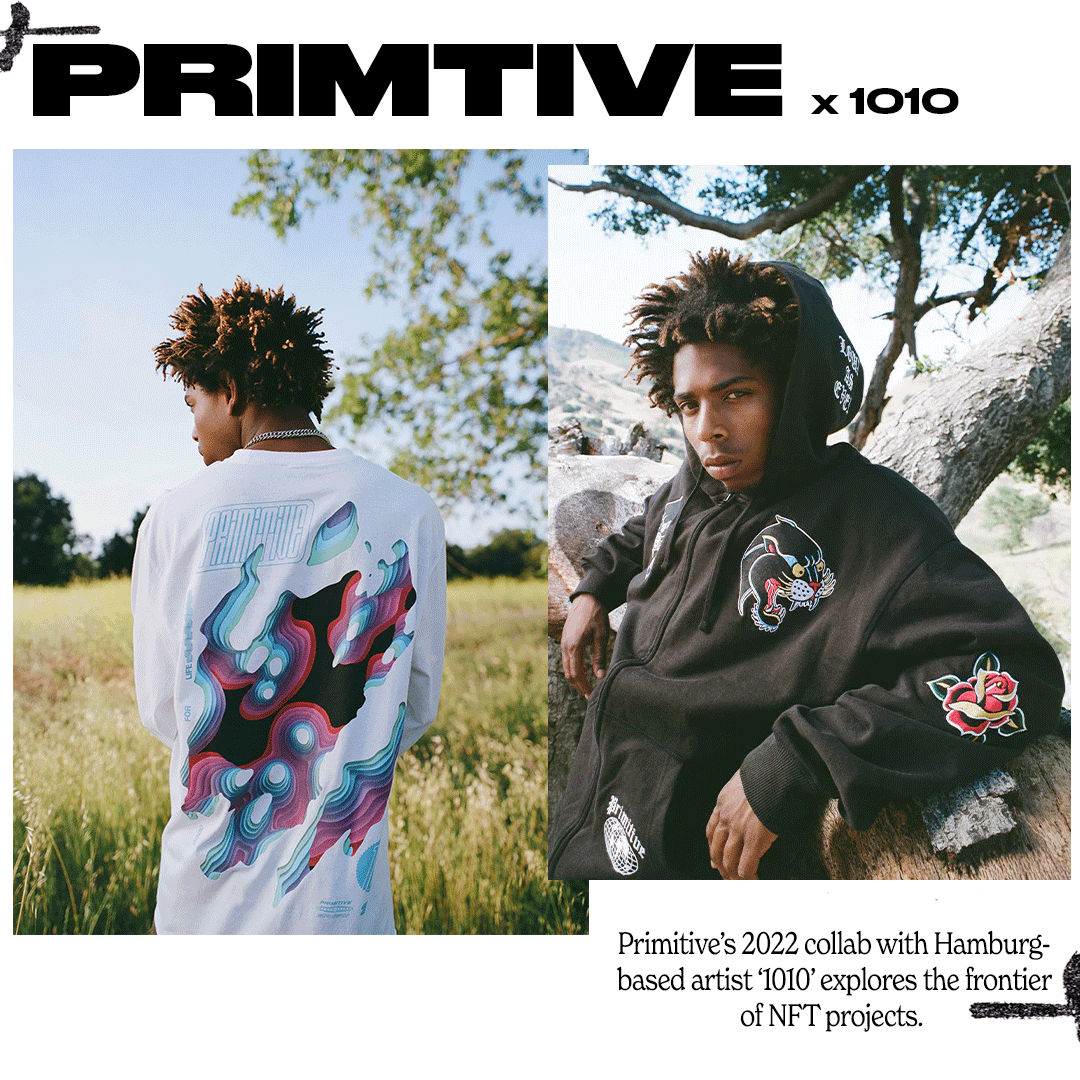 Primitive's skate team (and social presence) is a force to be reckoned with in terms of raw ability, but the brand's knack for creative apparel has become undeniable in the past couple of years.

One of its latest collaborative efforts -- a beautifully-crafted collection alongside Hamburg-based artist '1010' -- is a prime example of its street-savvy chops. 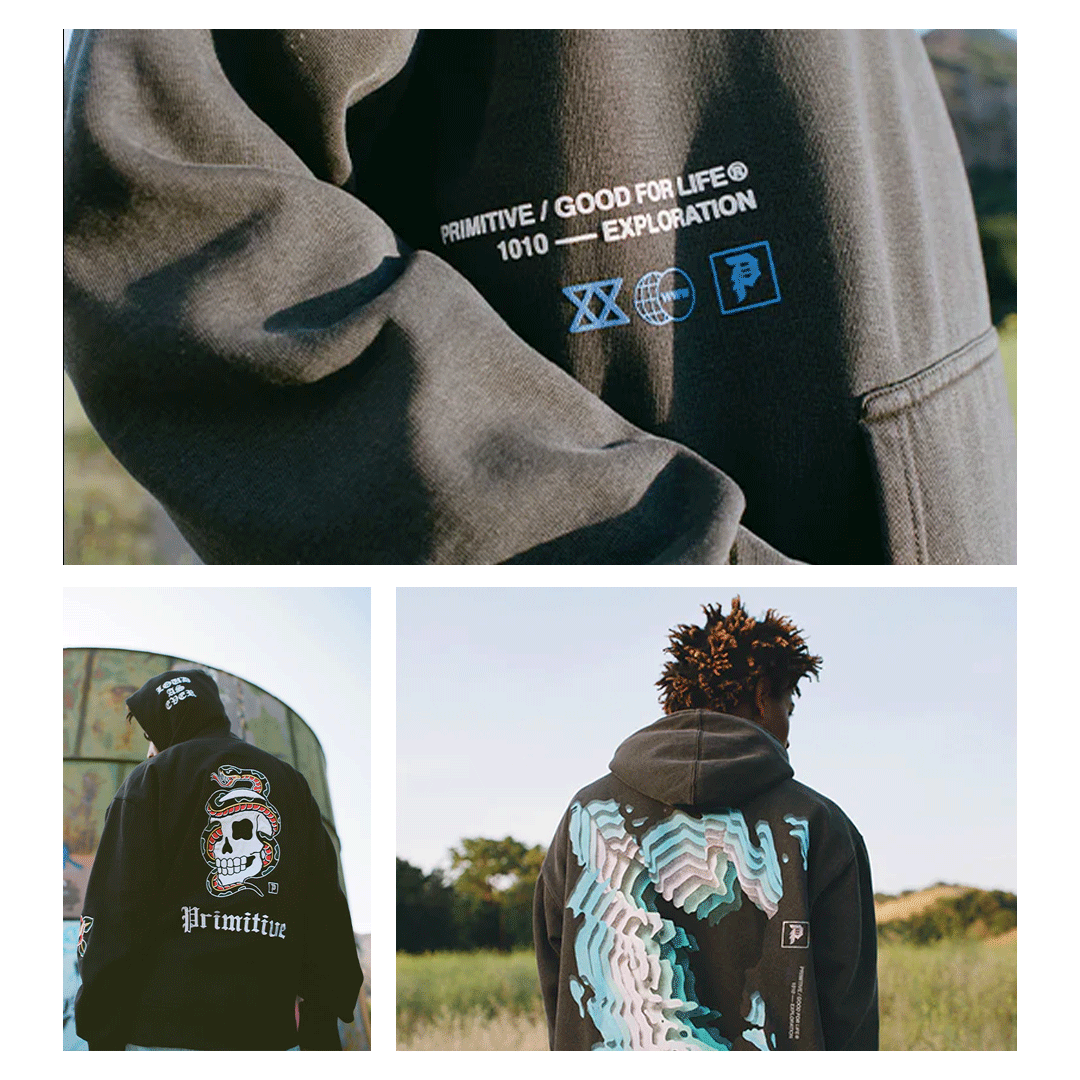 One look at the collection will tell you all you need to know, visually. A combination of contemporary and artistic design elements, typography, and dark, tattoo-esque illustrations captivate from afar.

But it's the capsule's unique approach toward the world of NFTs which proves to be its strongest hand. Throughout, you'll find psychedelic designs and print-like dreamscapes that reference 1010's recognizable art style and recent foray into Non-Fungible Tokens, making it one of the most intriguing collections we've seen in 2022. 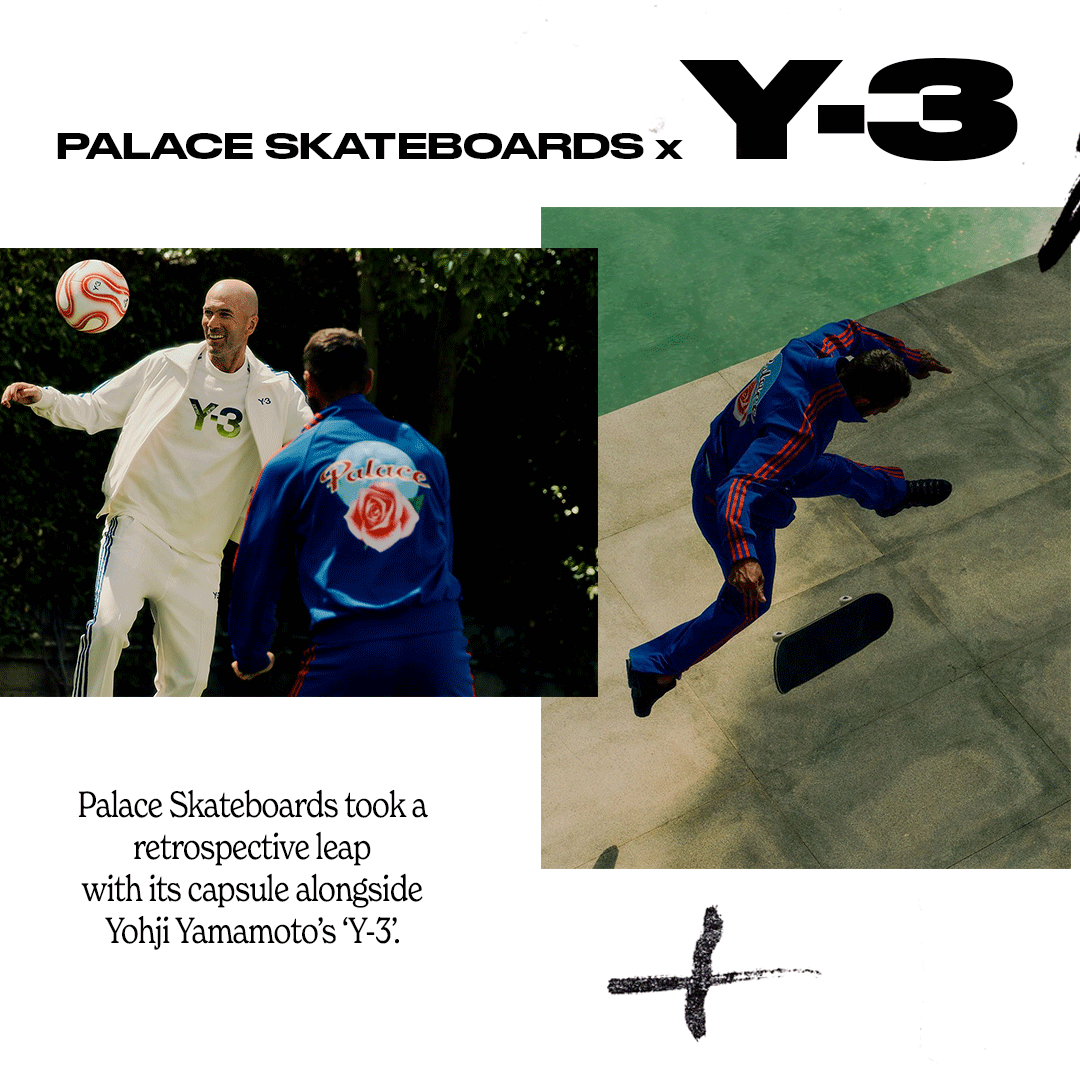 The next collection on our list arrives in the form of a retro-visual adventure, presented by Palace and Y-3 -- designer Yohji Yamamoto's passion project.

Within, a curated assortment of vintage-styled garments seek to reinterpret numerous pieces from Y-3’s history, archiving (and recreating them) for a new audience. 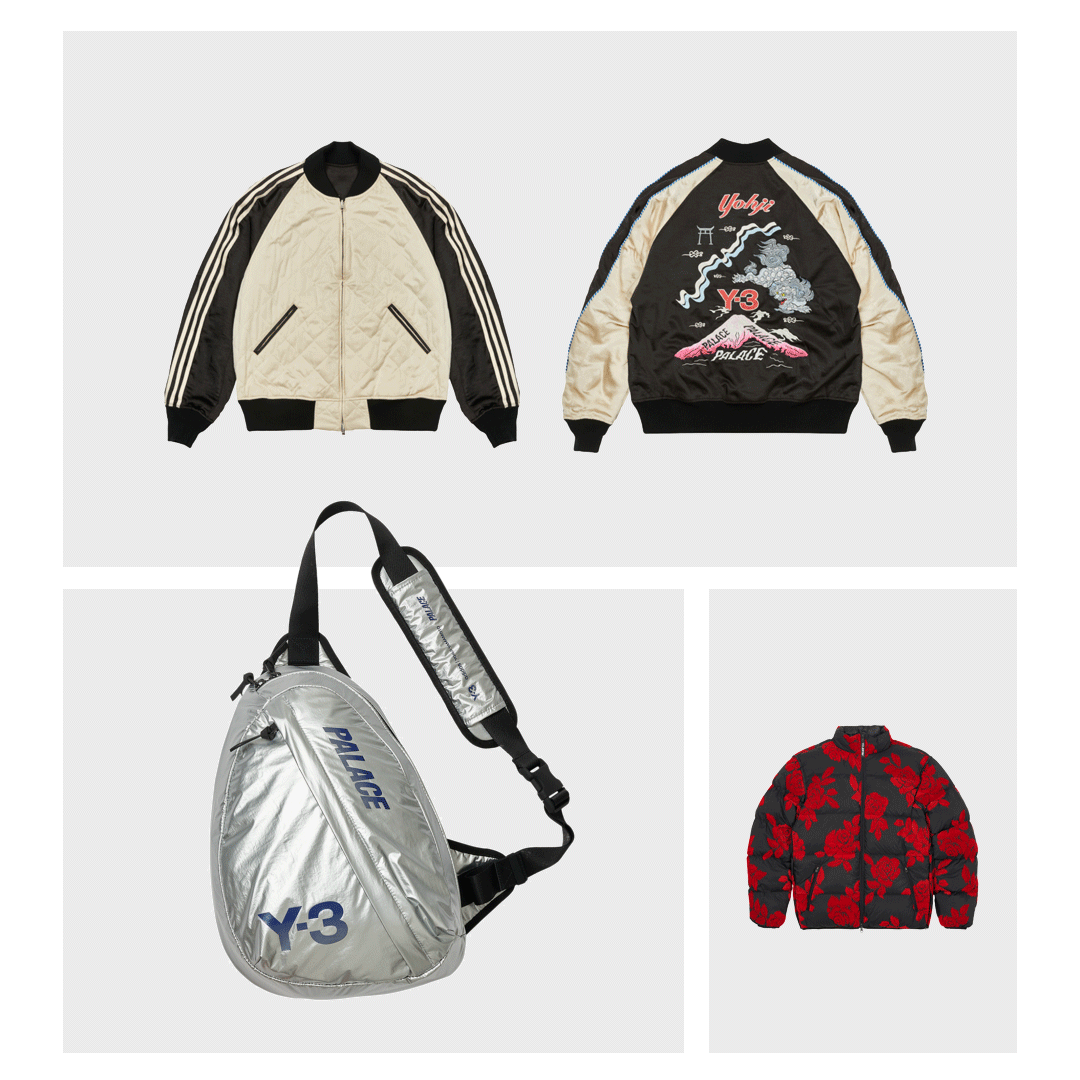 The capsule itself is an exercise in fundamentals, revising iconic garments from Y-3 in Palace's recognizable style. Bombers, bags, jackets, t-shirts, pants, hoodies, and hats bring the collection out of obscurity, adopting colorful splashes of illustration, modern typography, and unique icons.

But it's the collaboration's reflective Y-3 cross-body bag and Yohji bomber that steal the show. 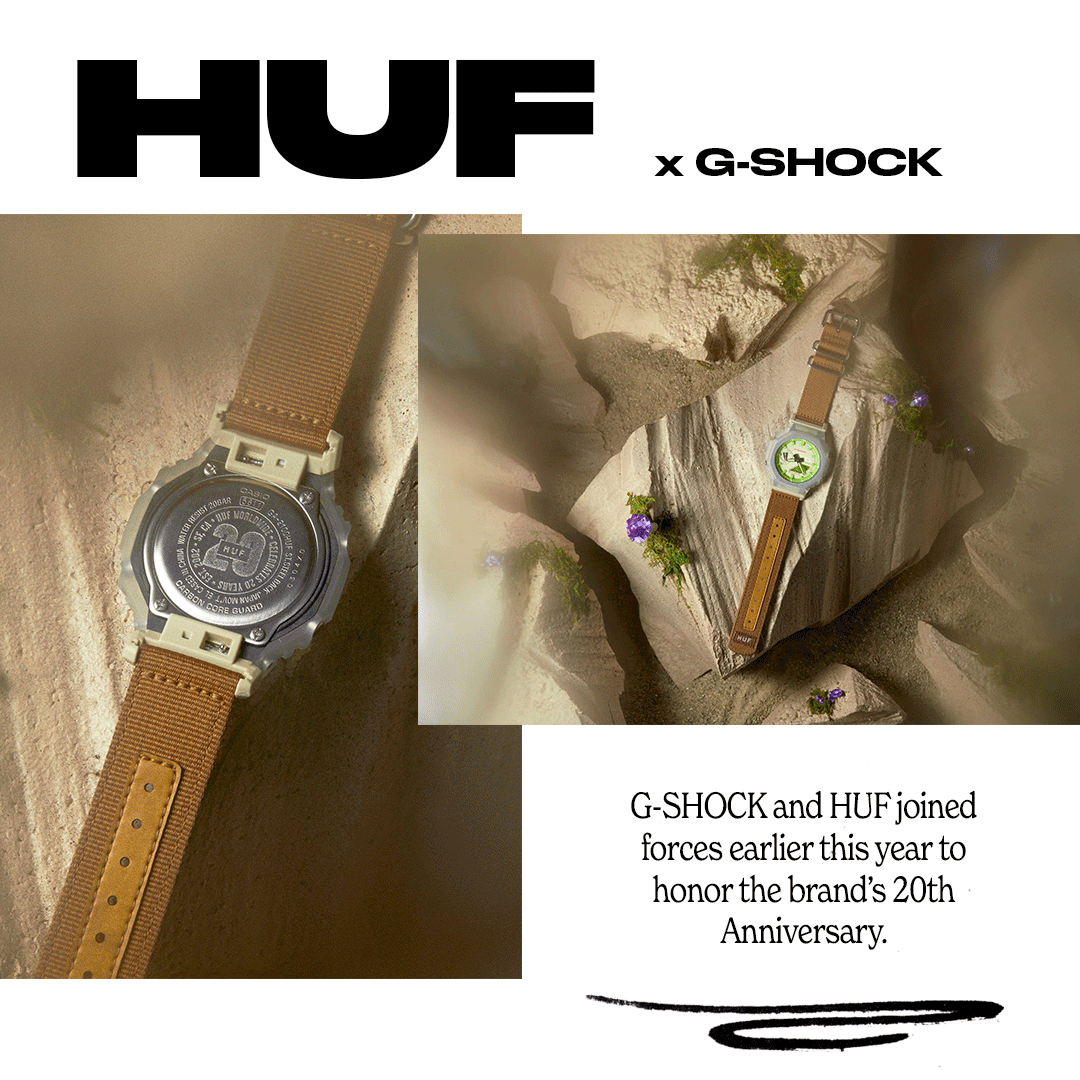 Last, but not least, we have the long-awaited unison between G-SHOCK and HUF. Following the harrowing loss of the company's beloved founder, Keith Hufnagel, in September 2020, the brand has moved forward with an array of collaborative projects primed to honor the outfit's immovable presence within the industry.

One of its most recent projects, the limited-edition GA-2100HUF-5A, is among its finest creations, while also honoring the brand's two-decade tenure.

The watch, which was released in July, was created to represent the unwavering faith (and constant evolution) of the two brands as they've traversed the currents of their respective industries.

Aside from the timepiece's notable resin and metal band loops, cloth band, and sneaker-eqsue inspirations, the 20th Anniversary model also features a lime green and orange dial, reminiscing the characteristic colors of the HUF brand.

The Drop: Billion Creation x Rally Caps ‘Back To School’